News, Reviews, and Recipes related to each of the individual categories. 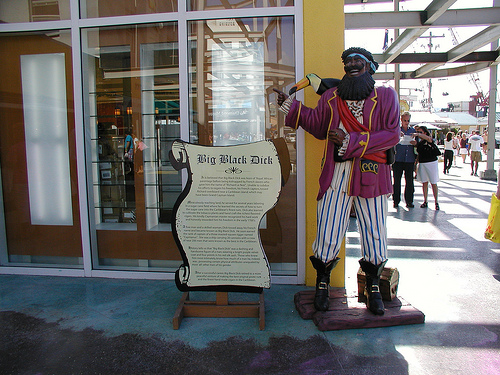 …..One of the biggest advantages of traveling is being able to eat and drink some unique products found only in foreign lands. A few months back I was lucky enough to take a trip to the Caribbean and like any alcoholic I found myself searching for some good rums to take back with me. As my wife and I walked past the many local shops, each with very “aggressive” tactics to get us to come in, we were caught a bit off guard when one yelled “You have to try some Big Black Dick”… What? “Come Try some Big Black Dick, as many samples as you want”… After we got over the initial shock we realized she was talking about a rum, popular in Grand Cayman yet relatively unknown in the states. Much like many other popular rums, this too comes with an interesting back-story that inspires it’s creation. According to their label:

“It is believed that Big Black Dick was born of ‘Royal’ African parentage before being kidnapped by French slavers who gave him the name of “Richard Le Noir”. Unable to subdue his efforts to regain his freedom, his French captors, tossed Richard overboard near a Caribbean island, which may have been Grand Cayman Island. Miraculously reaching land, he served for several years labouring in a sugar cae field where he learned the secrets of how to turn the sugar cane into the Caribbean’s finest rum. His kindly Caymanian master recognizing his hard work and hoensty awarded him his freedom in the early 1700’s.A free man and a skilled seaman, Dick tossed away his French name and became known as Big Black Dick. He soon earned the rank of captain of a three-masted-square rigger named “Caymanus”. She was a ship carrying 20 cannons with a crew of near 200 men that were known as the best in the Caribbean. History tells us that “Big Black Dick” was a dashing and handsome figure of a man, wearing a bright purple velvet coat and four pistols in his red silk sash. Those who knew him most immediately, know how much of a man he, indeed, was… possessing certain physical attributes unequaled by most ‘all’ other men of his gender.After a successful career, Big Black Dick retired to a more peaceful venture of making the best original pirate rum in the Caribbean.”

Cool story right? Captain Morgan and Sailor Jerry who? Whether or not a lick of it is true is not the point, but listening to that history would be enough to arouse my curiousity. The double entendre possibilities alone when whipping Big Black Dick out at parties would be worth $31.99 price tag. See what I mean? And so after sampling several of the varieties they offer (Light, Dark, Coconut, Vanilla), as well as downing a few complimentary rum cakes made with Dick, we decided to go with the Dark rum.

Presentation: Kudos to the marketing team for this one. From the overly darkened glass bottle to the exaggerated “length” of the bottle neck, this one plays well to it’s name. Though the cartoon like labeling screams of cheap, I think with this particular rum it works well for the gimmick.

Taste: The labels claim of “Stiff yet Tasty” didn’t exactly live up to my expectations. I’ve always lived by the rule to never buy a bottle based off a name/bottle design but this one I thought would be different. Coming from an area known for great rums, and having such a bold gimmick, I was looking for an equally bold flavor that could live up to the hype. Instead Big Black Dick started strong with a huge load of rich caramel/chocolate flavor that eventually died down and and left a funny taste in my mouth. All in all I definitely wouldn’t call this a bad rum, it just wouldn’t be my first choice to pour into a glass w/ ice and sip on. What I WOULD highly recommend is using this one as a mixer or float for some amazing tropical and Tiki drinks (Try some of Beach Bum’s recipes).

Grade: C+ (The conversations that the gimmick will provide make it worth the purchase so don’t be to scared by the C+ grading, it’s still a step above Bacardi)

So next time your out combing the beaches and visiting the Caribbean make sure to stop in the Grand Cayman and try some Big Black Dick. I promise, that’s my last innuendo. For more information on Big Black Dick Rum or any of their other products visit their parent website at www.BlackBeards.KY .As always don’t forget to Like us on Facebook. Until next time, class dismissed.

Posted by The Professional Drinker on October 1, 2011 in Reviews, Rum, Spirits, Spirits | Alcohol

For those in the Central Florida area, tomorrow is the 7th annual celebration of RumFest in downtown Orlando. What is RumFest? Only an amazing block party 3 hours long complete with live music, unlimited samples of some of the finest rums you can find and plenty of friendly people to interact with. With more rum than ever before, you can expect punches, daiquiris, concoctions, libations and more! Rums from around the world will be showcased, including: Don Q Silver, Appleton Estates Jamaican Rum, Bacardi Superior, Bacardi OakHeart, Mount Gay Eclipse,Ron Abuelo, Jack Flavored Rums, Sailor Jerry, Brugal, Margaritaville Spiced, 10 Cane, Malibu, and Kraken Black Spiced Rum, just to name a few!

Tickets are $20.00 in advance and $25.00 at the door. For $10 extra you can gain access to the exclusive Red Stripe Terrace where you’ll have access to unlimited bottle of Red Stripe lager, an exclusive special rum punch and an assortment of snacks and munchies all while overlooking the crowd down below at rumfest.

For more information, or to purchase your tickets, check out WallStPlaza.net

Posted by The Professional Drinker on September 23, 2011 in Events, Rum 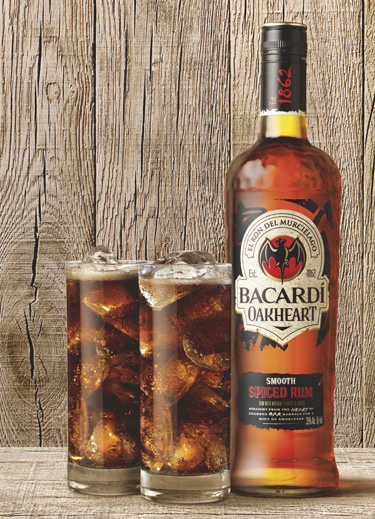 …..On September 15th, Bacardi, the top selling rum in the world will launch it’s newest product, Bacardi Oakheart spiced rum. Are you ready to take the Oakheart challenge? Similar to Jack Daniels recent Honey Liqueur launch, Bacardi is hoping to bring together more then 25,000 fans around the country to collectively try and celebrate its latest product launch. Markets involve in the Oakheart challenge include Arkansas, Delaware, Florida, Illinois, Iowa, Kansas, Missouri, New York, Nevada, Pennsylvania, South Carolina, Washington D.C., and Wisconsin. Not sure which establishments in your area are participating in the launch? Go to  facebook.com/bacardi where you can view their interactive map and find a participating bar near you. We at Intoxicology have not yet had the pleasure of giving it a taste but you can be assured that when we do we’ll be reviewing it here. From what I’ve heard it is a much better effort then their three previously failed attempts to enter the Spiced Rum department. Stay tuned.

Posted by The Professional Drinker on September 15, 2011 in Press Releases, Rum

“Join noted rum expert Robert Burr, author of the Gifted Rums Guide and host of the Miami Rum Renaissance Festival for a unique week-long rum-themed cruise through the Eastern Caribbean islands. Discover the birthplaces of great rums while savoring the best rums of the region with rum seminars, tasting events and VIP excursions to rum distilleries and visitor centers. Rum cruisers will meet members of the International Rum Expert Panel and rum ambassadors from leading rum brands while enjoying the camaraderie of fellow rum enthusiasts from many countries.”

The adventure sets sail from San Juan, Puerto Rico and takes you through Barbados, St. Lucia, Antigua, St. Maarten, and St. Thomas before arriving back in San Juan. What can you expect? Not your typical cruise that’s for sure. Guests of the Rum Renaissance Caribbean Cruise will enjoy practically unlimited tastings of rum, through various scheduled distillery tours and VIP tastings. Along the way you can also expect to catch some great deals and bargains on specialty rums as well as have the opportunity to try/buy some rums unavailable to us here in the states. My advice? TAKE ADVANTAGE. To inquire about pricing and secure yourself a spot on this guaranteed-fun ship, visit www.rumcruise.com .

Posted by The Professional Drinker on September 15, 2011 in Events, Rum

otball League has returned after a breif hiatus in which we were fortunate to have not missed any regular season games. With the return of football comes the return of tailgating and there’s no better sport to tailgate than Football (I’m sure some “Futbol” fans would disagree). Our opening game is less than 24 hours away and should be nothing short of a great kickoff to the season with the defending Super Bowl champion Packers taking on their Super Bowl predecessors the New Orleans Saints. In honor of this kickoff game I present some Packer/Saints inspired tailgating recipes. Enjoy.

I created a Packer Punch last year for my NFL inspired cocktails, but have since created a second recipe thus the 2.0. As a Bears fan it almost pains me to make something this good for a team I hate but it goes with the territory. Combine all ingredients in a punch bowl and it’s ready to go. Feel free to add club soda for the “sparkling” effect.

Add all your ingredients into a blender and blend to your desired consistency. Pour into a chilled glass and garnish with a slice of lime.

Like these recipes? Be sure to check out some of our other NFL Inspired cocktails as well as NCAA College Football inspired recipes. Your favorite team not listed? Don’t worry we’ll be adding recipes to the collection all season, or SUBMIT YOUR OWN TEAM RECIPES!. By the way, have you Liked us yet on Facebook? WHAT ARE YOU WAITING FOR !

Posted by The Professional Drinker on September 7, 2011 in Events, Rum, Tailgating, Tequila

Cocktail of the Week: Afternoon Delight

…..This weeks return of cocktail of the week comes with one of my favorite fruity summer drinks to sip on. Great choice for get together as well for relaxing on a summer afternoon and with summer almost over, this would be a great time to take advantage of it. This recipe is actually my adaptation of a recipe courtesy of one of Hawaii’s hottest mixologists, Amie Fujiwara. I personally like a bit stronger taste in my drinks, feel free to use my version, the original, or make it to YOUR taste.

…..Muddle two slices of orange and the two slices of lime in a mixing glass. Then add your ingredients; vodka, juices, sour mix and concentrate. Shake and then pour into a either a Martini glass or a Collins glass, your choice. Top off with your 7 up and garnish with your last slice of orange. Enjoy.

Posted by The Professional Drinker on August 28, 2011 in Cocktail Of The Week, Vodka

…..Tonight, in 18 Cities across the country Jack Daniels will host a one day only “Toast to Summer” celebrating the recently released Tennessee Honey Liqueur to their portfolio. The event is free however it is private so you will need to RSVP for an invitation. If you haven’t done so already, RSVP at JoinTheSwarm . You can expect a great social atmosphere, and plenty of complimentary Jack Daniels. If JD isn’t you’re thing though the events are being held at a regular bar so you will have the options to drink something else.

Posted by The Professional Drinker on August 18, 2011 in Events, Press Releases, Whiskey